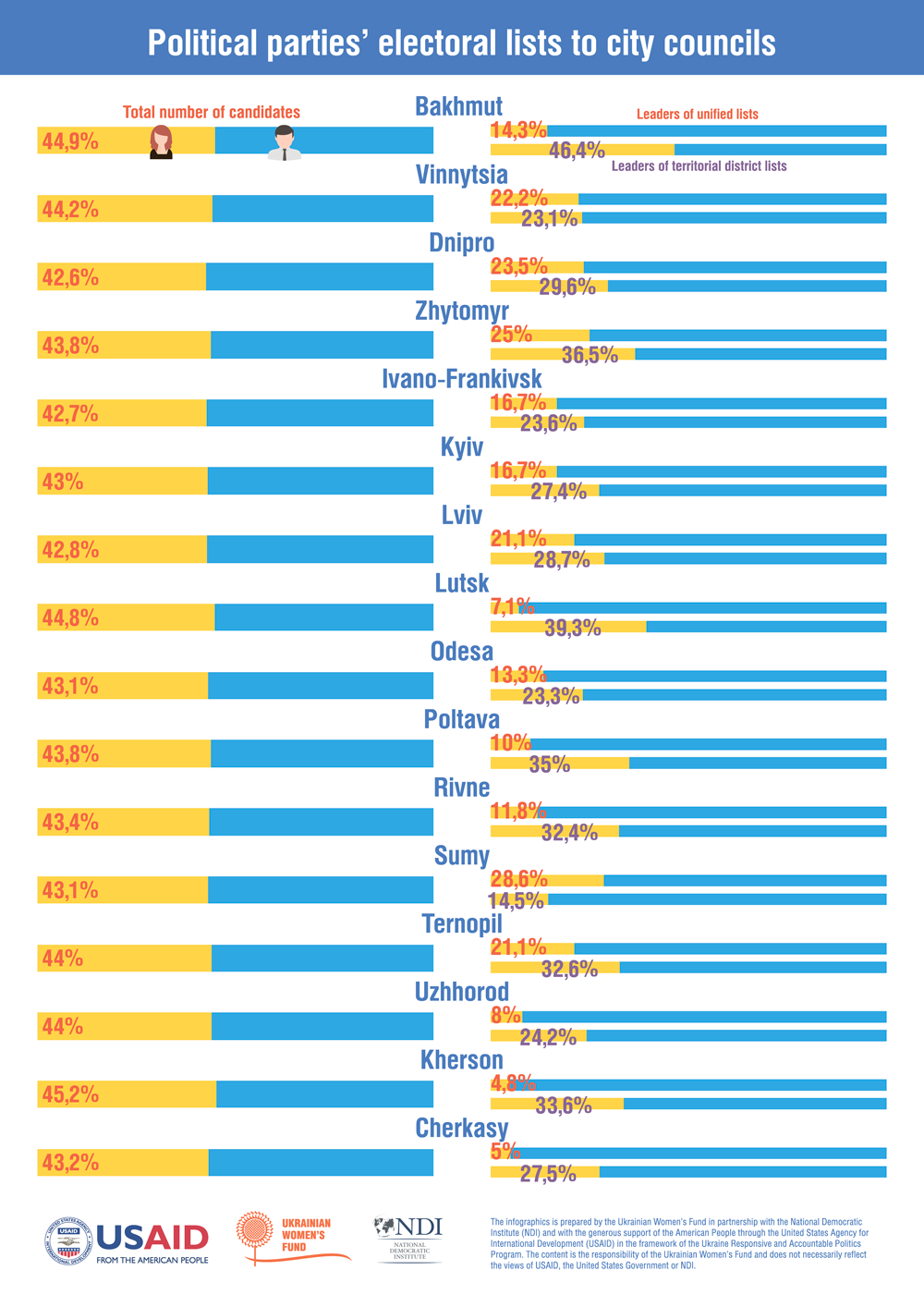 The Ukrainian Women’s Fund in partnership with the National Democratic Institute (NDI) is carrying out gender monitoring of the local elections held on 25 October 2020.

The purpose of this gender monitoring is to deliver a comprehensive gender analysis of the election process with the aim of identifying opportunities and obstacles for women’s participation in elections and for women’s election to local governments.

Based on election results data, the Ukrainian Women’s Fund summarizes interim outcomes of gender monitoring of the local elections.

The Election Code requires parties to adhere to the order of priority on the lists of candidates, in particular, no less than two men or women candidates shall be present in each five candidates on unified and on all territorial district electoral lists. Thus, the gender quota constitutes 40 percent. This rule applies to elections in communities with ten thousand or more voters and to oblast council, rayon council, and rayon-in-city council elections.

The gender quota mechanism has worked, but it has proved to be less effective than expected.

Compliance with the gender quota has led to more women on party electoral lists. For instance, women made up on average 43 percent of candidates on the electoral lists for oblast councils and for the 24 city councils of cities-oblast centers, Kyiv, Kramatorsk, and Bakhmut, while in the 2015 local elections their share was 30 percent for oblast councils and 32 percent for city councils.

However, although the representation of women on electoral lists was 43 percent, this did not lead to the same level of women’s representation among elected candidates.

The gender quota was most helpful in communities with the lowest women’s representation, having given an opportunity for women to be elected and have access to decision making. For instance, in Zhytomyr and Ternopil oblast councils, where women comprised 9.5 percent, their representation increased to 29.7 percent and 23.4 percent respectively. In Uzhhorod city council, where only 8.3 percent of women were represented, their share grew to 23.7 percent. In Ivano-Frankivsk and Cherkasy city councils, where women constituted 9.5 percent in each, women’s representation increased to 28.6 percent and 26.2 percent respectively.

The situation has not changed critically in councils where women’s representation was relatively high prior to the 2020 local elections. For instance, the percentage of women in Dnipro city council grew from 20.3 percent to 26.6 percent.

Based on preliminary election results, women’s representation will reach 40 percent only in Zhytomyr city council (40.5 percent) among all oblast councils and city councils in big cities. Positive impact of the gender quota was limited by a formal approach adopted by political parties.

Parties gave preference to men when nominating first candidates and top three candidates on both unified and territorial district party lists, which resulted in a lower number of women elected. Candidates are most likely to be elected to local councils when they are placed in these specific positions on party lists.

In particular, according to the analysis of 271 electoral party lists, registered for elections in all 22 oblast councils, political parties nominated women as “leaders” of unified lists only in 45 cases (16.6 percent). Similar situation was observed when it came to electoral lists for the 24 city councils of cities-oblast centers, Kyiv, Kramatorsk, and Bakhnut; parties nominated only 63 women (16 percent) among the 393 “leaders” of unified lists.

A more in-depth analysis of territorial district electoral lists of the sample of ten political parties that submitted their electoral lists to oblast councils and to the above mentioned city councils – Batkivshchyna, Golos, Trust the Deeds, European Solidarity, For the Future, Samopomich Union, Opposition Platform – For Life, Opposition Bloc, Svoboda, and Servant of the People – demonstrated that although the parties nominated 43 percent of women on their lists in general, among the top three candidates to oblast and city councils on territorial district lists women constituted 27 percent and 33 percent respectively, while only 18 percent and 27 percent of women respectively were represented among the first candidates on territorial district lists.

Besides, cases of gender quota violations by political parties have been recorded: lists submitted by parties to TECs were not compliant with the gender quota, mainly when it came to the first five candidates on the list, where preference was given to men. Some TECs, despite being obliged to establish compliance of the lists with the Election Code requirements, ignored the violations and registered such electoral lists.

Possible reasons behind this include insufficient involvement of women in decision making during candidates’ nomination and while deciding on other crucial internal party issues. According to the 2019 monitoring results, women led only 19 percent of oblast party organizations[1].

Disproportionate placement of women and men “at the top” of electoral lists has become an unfavorable factor for women running for local councils, while they comprise 54 percent of Ukraine’s population. Such placement will eventually restrict the influence of women on making decisions that are important for communities.

However, even limited implementation of the quota made a positive impact on women’s representation, as very few women were part of the previous local councils; in particular, only 15 percent of women were represented in oblast councils and 20 percent in city councils.

Due to the gender quota parties managed to form their lists in a more democratic way, having nominated women party members and women opinion leaders of local communities.

The Ukrainian Women’s Fund calls upon political parties to go beyond compliance with the quota during elections and be more active in involving women in party work in between elections, including decision making and policy making.

[1] A sample of ten political parties: Batkivshchyna, Golos, Civic Position, European Solidarity, Opposition Platform – For life, The Radical party of Oleh Lyashko, Power and Honour, and Servant of the People.

Final report on gender monitoring of the 2019 snap parliamentary elections in Ukraine. 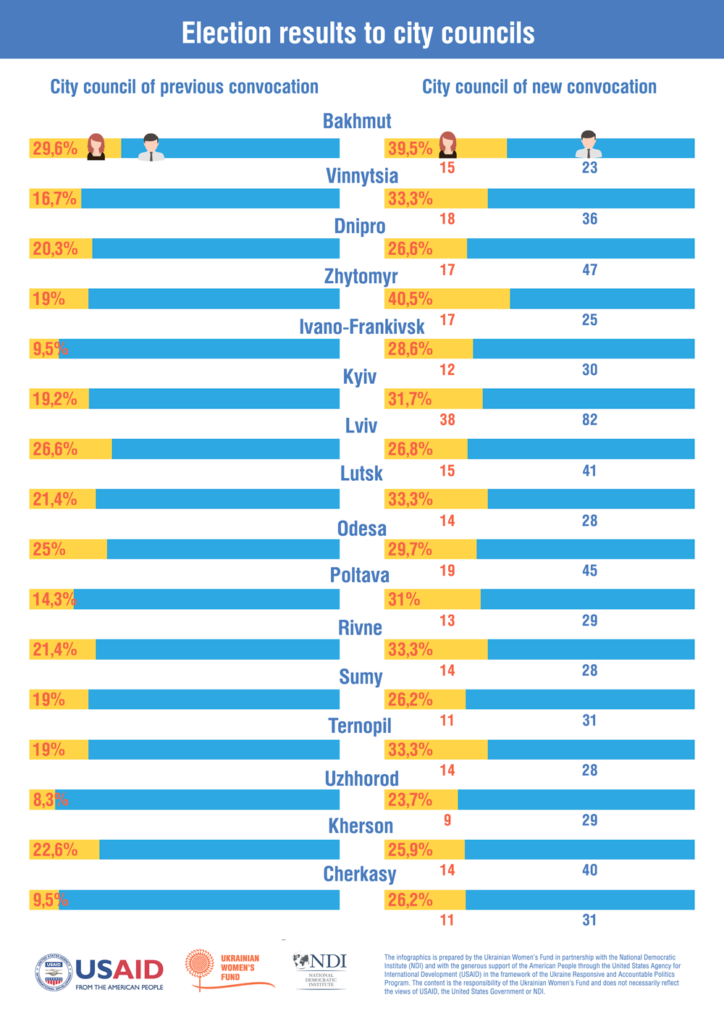