Statement No. 2 on the Interim Results of Gender Monitoring of Ukraine’s Local Elections on October 25, 2020 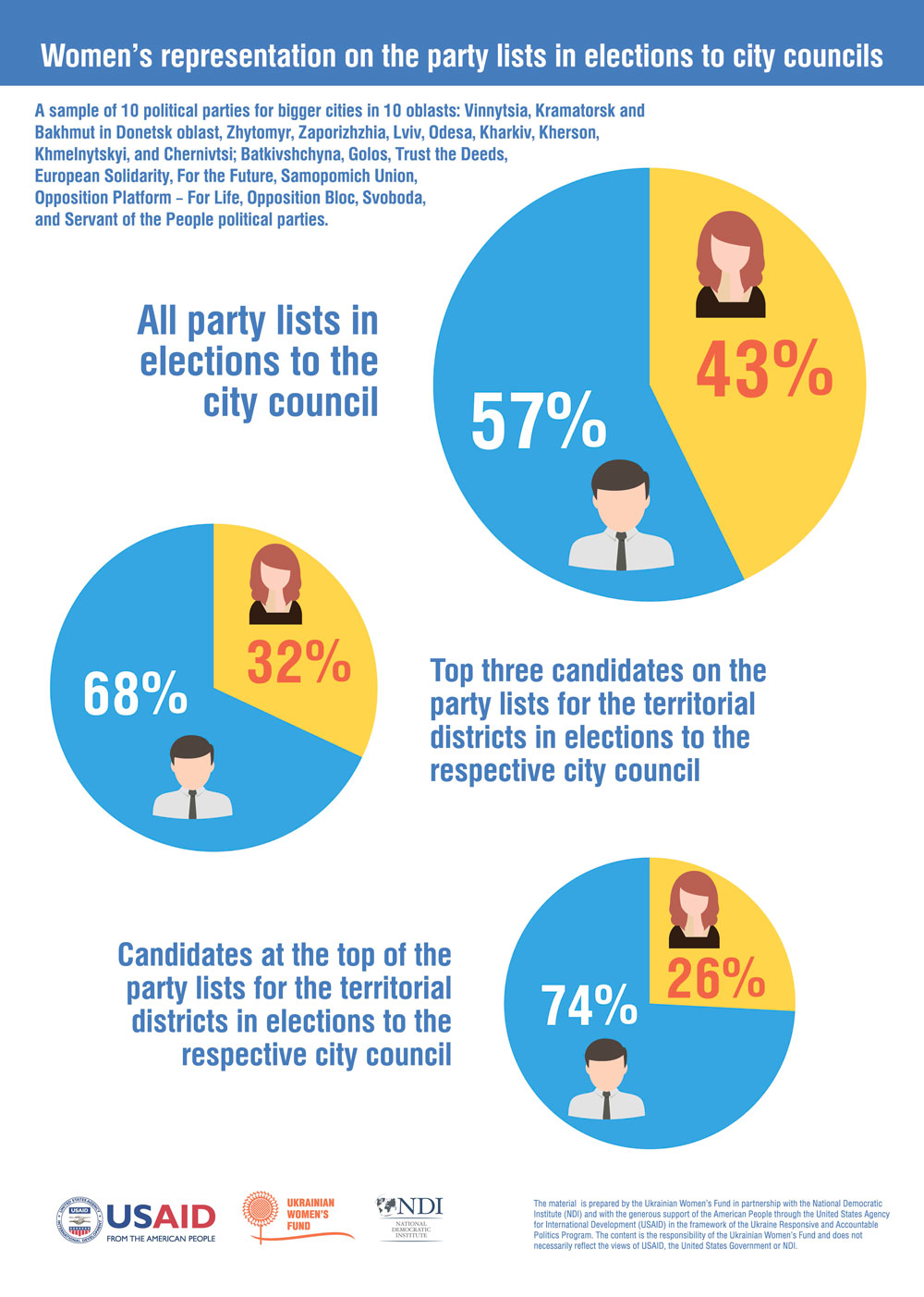 The Ukrainian Women’s Fund, in partnership with the National Democratic Institute (NDI), is carrying out gender monitoring of the local elections scheduled for October 25, 2020.The purpose of this gender monitoring is to deliver a comprehensive gender analysis of the electoral process in order to identify opportunities and obstacles for women’s participation in elections and their election to local self-government authorities. As part of the monitoring process, publicly available data is collected and analyzed across all oblasts of Ukraine, election campaign is monitored, and in-depth interviews are conducted with women candidates in 10 oblasts: Vinnytsia, Donetsk, Zhytomyr, Zaporizhzhia, Lviv, Odesa, Kharkiv, Kherson, Khmelnytskyi, and Chernivtsi.

On the eve of the Election Day, the Ukrainian Women’s Fund sums up the interim findings of gender monitoring of the elections.

The Election Code requires political parties to observe certain order of the candidates on the lists, in particular, there must be at least two men or women candidates in every five candidates on the list. The gender quota thus constitutes 40 percent. This rule applies to elections held in communities with 10,000 or more voters, as well as to elections to oblast councils, rayon, and rayon-in-city councils. As the Election Code provides no opportunity for self-nomination during elections to such councils, the role of political parties in ensuring the representation of women and men in elections increases.

As the analysis of official data shows, a total of 43 percent candidates on electoral lists in 22 oblast councils are women, resulting from compliance with gender quotas, whereas among the current oblast councilors only 15 percent are women. The same applies to the electoral lists for the 24 city councils of oblast centers, Kyiv, Kramatorsk, and Bakhmut, which have been analyzed, where women also make 43 percent, while they constitute only 20 percent in the current composition of the respective councils.

However, women being present at 43 percent on electoral lists does not mean that the same representation percentage will be maintained among the elected men and women candidates.

The first candidates on the parties’ unified electoral lists have an advantage when the seatsare allocated.

Analysis of 219 electoral lists registered for the city council elections in Vinnytsia, Kramatorsk and Bakhmut in Donetsk oblast, Zhytomyr, Zaporizhzhia, Lviv, Odesa, Kharkiv, Kherson, Khmelnytskyi, and Chernivtsi from different political parties shows that political parties placed women at the top of the unified lists in 28 instances (13 percent) only.

The disproportionate placement of women and men at the top of the electoral lists by political parties disfavors the election of women, who make up 54 percent of Ukraine’s population, to local councils, and ultimately limits women’s influence on key decision-making in the communities.

Gender monitoring included an analysis of women candidates’ experience by in-depth interviewing. The women candidates’ experience in the electoral process is being analyzed in three stages: at the start of the election campaign, at the end of the election campaign, and after the elections are over and results are announced. At the first stage, 42 women candidates residing in 10 oblasts (Vinnytsia, Donetsk, Zaporizhzhia, Zhytomyr, Lviv, Odesa, Khmelnytskyi, Kharkiv, Kherson, and Chernivtsi) and running for the oblast councils, city councils of oblast centers, and communities with less than 10 thousand voters, as well as for city mayor from a wide range of political parties both from parliamentary ones and from those whose influence is more local rather than nationwide, have been interviewed. Half of the respondents interviewed (21) are members of political parties, while the other half (21) are not.

The majority (93 percent) of the respondents believe that it was gender quotas that contributed to the wider nomination of women by political parties in local elections. In the words of one respondent, “if it weren’t for the quota, there would only be men on the list.” Several respondents noted, however, that their party was at all times guided by the principles of equal opportunities for women and men, therefore they would have complied with the gender quota even without a mandatory legal rule.

A third of respondents have experienced electoral violence during local elections. Instances of violence included bullying on social networks, damage to campaign materials, threats on the phone, hacked Facebook pages of the candidates, and even physical violence used against campaign staff. One of the respondents cited black PR used against her by the persons distributing food packages among voters allegedly on her behalf. Women candidates are mostly prepared for manifestations of sexism and electoral violence, and some of them always carry pepper sprays for self-defense. Some parties have provided relevant clarifications on the topic of potential electoral violence. Overall, women respondents expected more powerful methodological support for the election campaign from political parties, in the meantime resorting to self-education and joining open competitions to receive training from civil society organizations and foundations.

Importance of gender monitoring is determined by fact that women are underrepresented in the local councils. For example, according to the NDI’s analysis of official data women constitute less than 41 percent of local councilors and just over 18 percent of mayors in 982 consolidated territorial communities established as of December 22, 2019. In comparison, prior to decentralization women represented close to 50 percent of village councilors and more than 30 percent of village mayors.

The Ukrainian Women’s Fund emphasizes that real opportunities for equal participation of women and men in elections and, ultimately, in the decision-making that impacts local communities should be created.

The role of parties is key to achieving a more balanced representation of women in the electoral process and in politics. Gender monitoring will provide the basis for dialogue with political parties on positive changes to achieve gender equality. 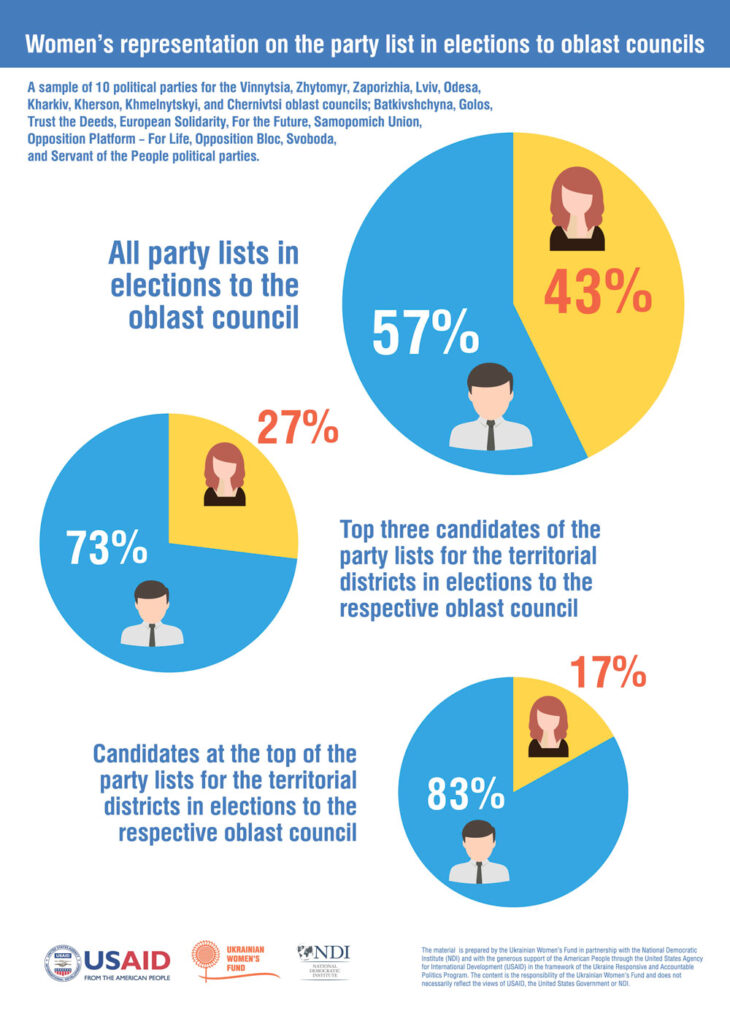