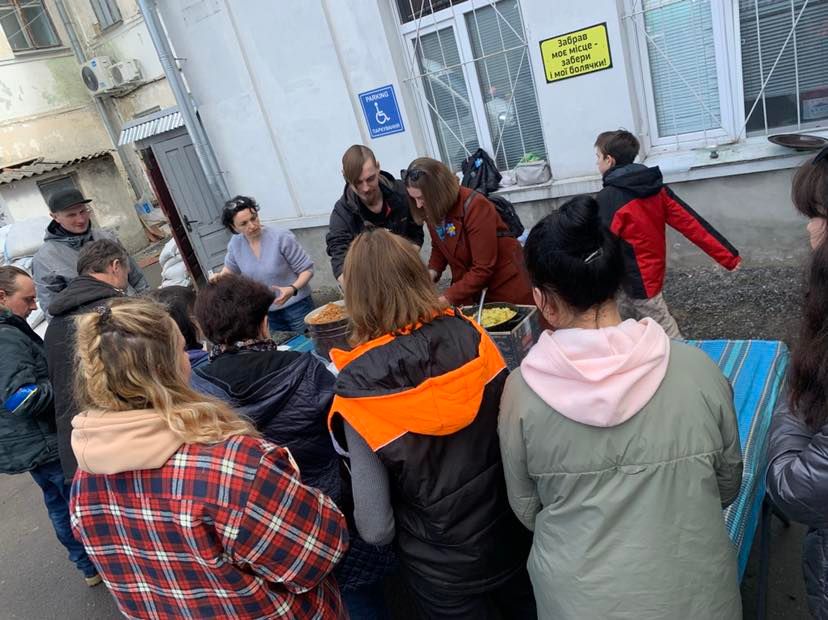 Women with cancer, mothers of children with disabilities—the war has silently left them behind. But women’s/feminist organisations in Vinnytsia and Khmelnytskyi oblasts are giving them the chance to survive and return to life. The women who work in these organisations know how to help because many also live with illness and disability. They listen with empathy to the stories of people being evacuated—after all, when they themselves were fleeing the war in Donbas eight years ago, they also sought to be heard. With kits of humanitarian aid, they give displaced women and children back their dignity, which they know is more difficult to recover than documents and material things.

Women’s/feminist organizations supported by the Ukrainian Women’s Fund are responding to the urgent needs of women and girls and creating the conditions for them to return to a peaceful life. From March 4 to April 18, 2022, UWF provided 56 rapid response grants totalling UAH 12,251,301 (USD 414,564) to these organizations. Out of concern for the safety of the participants, until Ukraine’s victory we will only name those individuals and organizations who wish to be named. 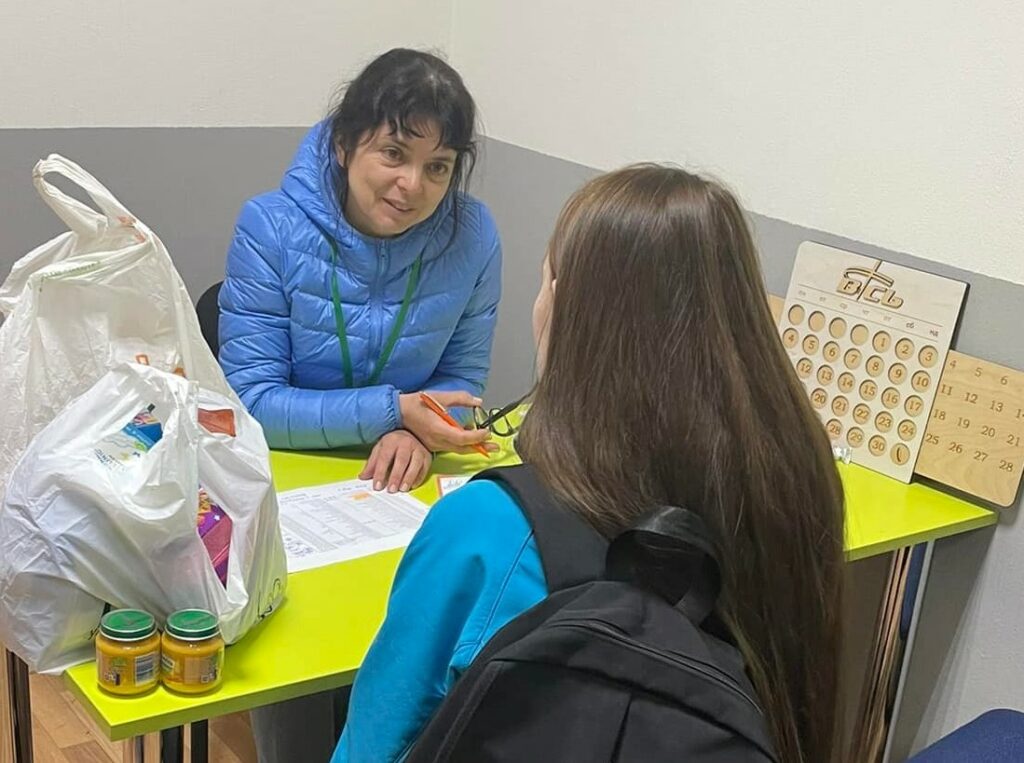 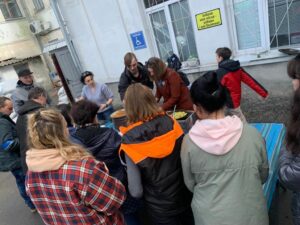 Vinnytsia and Khmelnytskyi have the highest number of internally displaced people who have been forced to leave their towns and villages because of Russian military aggression. As of mid-April, there were more than 100,000 displaced people officially registered in these oblasts.

“But not everyone is getting registered. Some do not plan to stay for long, some are in transit and [plan to go] further to the west. And the city only provides one-time assistance to those officially registered,” explains Svitlana Dubina, head of the NGO VIS (Vinnytsia). Thanks to a grant from the Ukrainian Women’s Fund, VIS provides basic necessities to relocated people and their families. Svitlana says that people are happy to get any help, but the standard kits are not suitable for everyone. Some need food right away, while others need to wash or change their clothes to get rid of the smell of the basements they have been hiding in. So, VIS gives them exactly what they need and as many times as they can afford. “We talk to people rather than silently passing them a kit. We ask about their stories and needs, not about the data for the documents. It takes up a resource, but it’s important to help with dignity,” Svitlana asserts.

Five IDPs who were wards of VIS have now become volunteers. They confirm that people in difficult life circumstances not only need food, hygiene products, and medicines, but also humane treatment, human contact, and the opportunity to be useful. Even the displaced children are happy to share their toys with each other.

Another Vinnytsia women’s organization also listens to its beneficiaries. The coordinators of its UWF-supported rapid response project became honorary citizens of Vinnytsia in 2015 after they left their native oblast of Luhansk because of the war. At the time, the most important thing for them was to be heard and to be understood.

Now, over the past month and a half, staff of the organisation has listened to hundreds of stories that are impossible to get used to, no matter how many they hear. They share the stories of the women and children they help without holding back the tears—stories of women who gave birth in basements or while being evacuated, of a woman in her last week of pregnancy fleeing shelling in Kyiv oblast in her car with a baby carrier in the passenger seat. Or this story about the mother of a boy with kidney failure:

They tried to stay in a shelter. But a child with his diagnosis was not allowed to get cold: the disease began to worsen. Soon the child’s father had a heart attack. When a rocket hit the neighbouring yard, the woman dragged them both out of the cellar and put them in the car. There was no green corridor, the track was under target fire. The only thing that saved them was that the woman knew the side roads. She had to drive over the dead bodies of her fellow villagers. She was crying, screaming, was crossing herself [in prayer], but kept going. Now the woman cannot sleep: in her dreams, she sees people whose corpses have paved the way to safety for her family. A psychologist, who also rescued herself from a hot spot, is now working with her.

The demand for psychological assistance among IDPs, employees, and volunteers of women’s/feminist organisations is many times greater than the capacity to provide it. But thanks to UWF’s support, the organization holds webinars for non-psychologists on basic psychological first aid techniques, such as how to bring a person out of a catatonic state or hysteria, and how not to get consumed by emotions when supporting others. 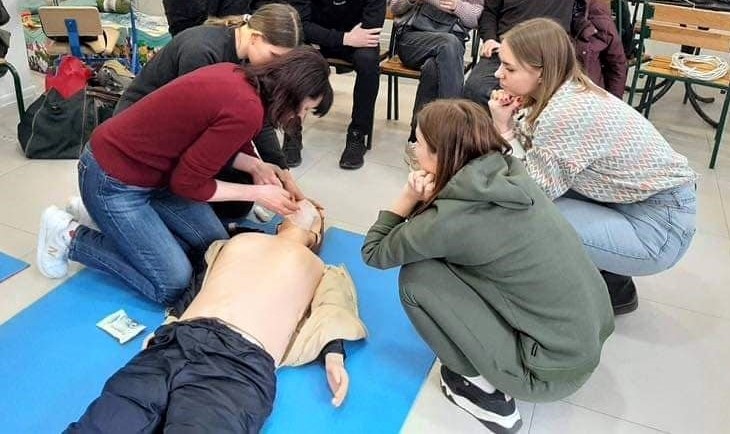 In the early days of the war, the head of another organization in Vinnytsia gave her home to a family with five children fleeing the war zone and went to live with her son. She describes her motivation and the difference the UWF grant has made:

Until it was possible to help displaced women systematically, it was important for me to support women at least with my own capabilities—sow the first seeds of good, and they will multiply. Thanks to a grant from UWF, our organisation was quickly able to cover the need for shelters—in a matter of days there were almost three times as many shelters in the city. A company sold us hygiene products and medicines at a huge discount. The mall allowed us to use their warehouse for our humanitarian aid free of charge. Blankets, kettles, and lights—in excellent condition and often brand new—were simply donated by people. With the money we saved, we were able to build a bathroom in one of the shelters.”.

Many of those who have received her organisation’s support have now become volunteers, such as a small group of young people from Mariupol who came to Vinnytsia together—two women,two men and a child. Hiding in a Mariupol bomb shelter for three weeks, they had run out of food and were collecting water from puddles. When the puddles dried up, they decided to leave the city, thinking that if they were to die, at least they would die quickly. So, one night they patched up their car and set off. At a roadblock, Russian personnel stripped them naked looking for patriotic tattoos but, failing to find any, allowed them to leave. The first Ukrainians the young people met gave them water, and they could not get enough of it. Next came bread, which they said was the best they had tasted. They thought they would finally sleep soundly in relatively peaceful Vinnytsia, but found they could not. “I look at the ceiling at night and remember myself before the war,” says one of the young women. “I had everything, and I didn’t feel happy, I didn’t understand what the meaning of my life was. It turned out to be bread and water: if you have them, you are alive.”

Women’s organisations in Vinnytsia and Khmelnytsky oblasts organised meetings with displaced women to talk about their prospects. However, it appeared that the mothers of small children (the majority of the women) had no vision of what to do next. Some had just arrived and were not familiar with their new town—many were still in shock. Others had no work or childcare. As a temporary solution to employment and livelihood needs, women’s organisations have been investing in building an ecosystem that integrates organisations in the women’s movement and other voluntary sectors to provide a holistic range of support to people in need. 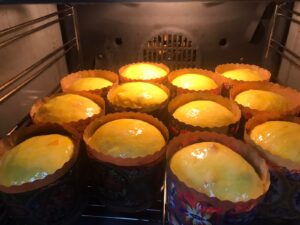 With the support of UWF, women’s/feminist organisations and other groups in Khmelnytskyi oblast have established a joint volunteer centre, Zakhyst (Protection), based at the Centre for Social and Psychological Adaptation for families of ATO/JFO participants. The centre coordinates the collection of aid for Ukrainian troops and those affected by the fighting. Not only do volunteers (both men, and women), collect, package, and deliver humanitarian aid and ammunition, but they also produce canned food, camouflage nets, and anti-tank barriers in enormous quantities. The day before Easter they prepared traditional baked goods for military personnel and civilians who were unable to prepare their own. Zakhyst also takes care of the new life that is sprouting despite the war by providing the perinatal centre with kits for premature babies. Volunteer groups hold classes on first aid care in critical conditions, as well as on history and the Ukrainian language. Tetiana Baeva, coordinator of the Women. Peace. Security. Khmelnytskyi 1325 coalition and head of the NGO Podilsk Centre of Gender Council shares the key to the centre’s success: 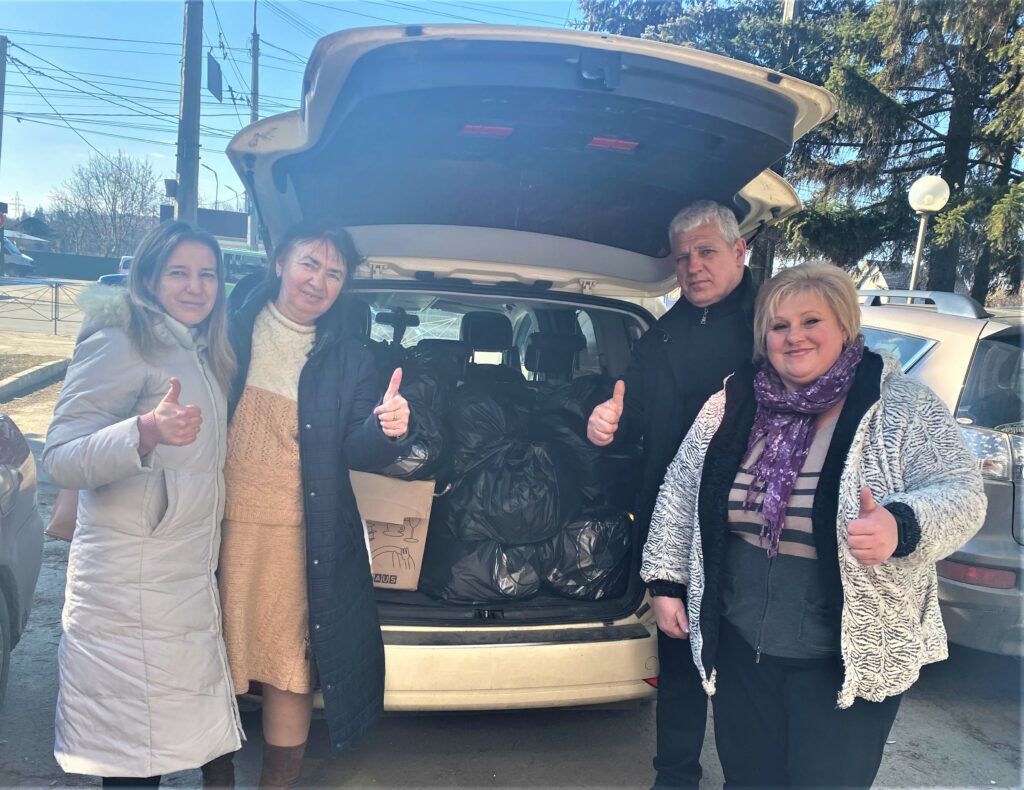 If it wasn’t for our previous experience interacting in the coalition, whose establishment was supported by the Ukrainian Women’s Fund, we would not have been able to found such a powerful volunteer centre as Zakhyst. The coalition includes veterans of the ATO/JFO, workers and employees of the Border Guards Academy, National Guard, National Police, local authorities, and NGOs. They all know the situation in their sectors and also how to cooperate.

The experience, narrow specialization, reputation, and results-orientation of Vinnytsia NGO, a UWF grantee, has enabled it not only to evacuate more than 100 people with disabilities abroad but also to lay the foundation for their return and a new standard of living in a peaceful Ukraine. The organisation is staffed mainly by women with disabilities and people who take care of others with disabilities. People with cancer, totally and partly immobilised patients, and people with mental disabilities cannot stay in bomb shelters for long, cannot evacuate on their own, and need constant treatment and care. Thanks to a rapid response grant from UWF, the Vinnytsia NGO bought thermal bags used during evacuations to transport medicines that require temperature control. The NGO is almost ready to open a centre that will provide supported accommodation for people with disabilities when they return to Ukraine. Mothers of children with disabilities will also be able to leave them at the centre for a few weeks while they get their own houses in order or secure temporary accommodation if their homes have been destroyed. As the head of the women’s NGO explains:

We have special sanitation and transport facilities, workshops and other activities, and our people know how to look after children with different disabilities. This will free the mothers’ hands and prevent imposing extra trauma on children: they will see and feel care rather than the ruins of their former lives.