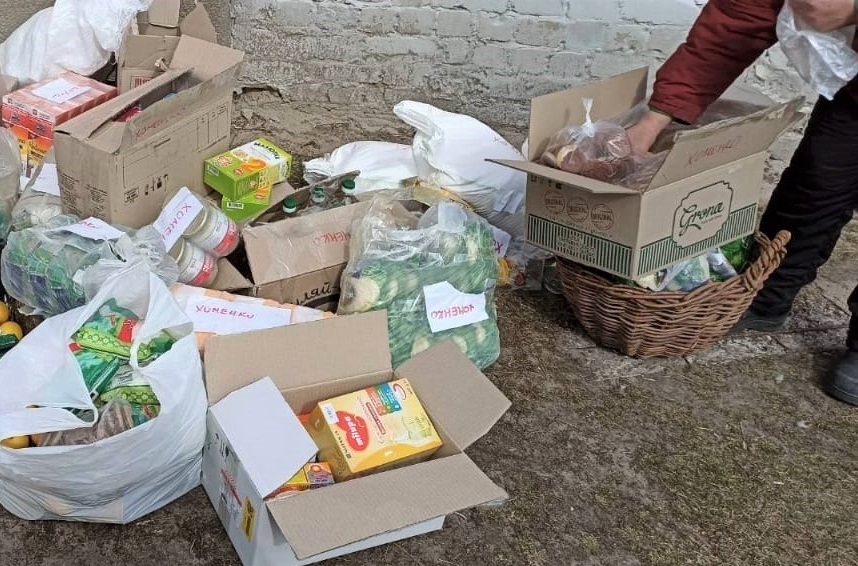 Women’s/feminist organisations provide care for servicewomen and women fighting in the Territorial Defence Forces, as well as civilian women living in active combat zones, being evacuated, and enduring occupation by Russian troops. For a month now, the Ukrainian Women’s Fund has been helping these organisations with rapid response grants. Between March 4 to April 4, 2022, UWF distributed 43 grants to respond to urgent war-related needs, amounting to UAH 9,377,906 (USD 316,148) covering most oblasts of Ukraine. In a new review, we share what these organisations are doing to protect the lives and rights of women in hotspots, with support from UWF. As always, out of concern for the safety of members of the women’s/feminist movement and until we have achieved victory, we will only name people and organisations who have agreed to it.

What women in the military want

One in six soldiers in the Ukrainian Armed Forces is a woman. Since the first day of Russia’s attack on Ukraine and the imposition of martial law, women in various positions in the military—including tank commanders, artillerists, military pilots, company and platoon commanders, and snipers—have been undertaking demanding combat missions. Those of our grantees who have  been in contact with women in the military have discovered that they lack the equipment they desperately need to preserve their health, protect their lives, and carry out their service properly. Volunteer assistance for the most part does not consider women’s concerns about the size and fit of tactical clothing and equipment. Women service members generally lack thermal underwear, unloading vests for carrying auxiliary gear, tactical gloves, and socks.

Supplying equipment is frequently difficult during combat operations, precisely when supplies are exhausted and they are needed most. Challenges include finding manufacturers (either in Ukraine or abroad) who can tailor their products to the war needs, delivery services that only work in conditional security zones and when there is no air-raid alarm, and a lack of volunteers who are able to deliver individual or small orders to units and deployed servicewomen. Thanks to the UWF grant, the Volyn-based women’s NGO collects the most urgent requests from women in the military, procures the materials, and delivers them to where they are needed in combat zones and by Border Guards. In addition, the organisation negotiates with gender equality officers in the security and defence structures to ensure that ammunition supplies take women’s needs into account.

In the hotspots of Kyiv oblast

Bucha, Irpin, Hostomel, Vorzel—these towns are now known to the world and have become synonymous with looting, torture, and the murder of civilians and residents of the Kyiv suburbs. Since 14 March 2022, a women’s/feminist civil society organisation has been supporting women from this oblast, including those who have been evacuated and those who have stayed. The coordinator of a targeted assistance project supported by UWF describes the extent of the need:

As of now, 51 families have already received targeted assistance of one thousand hryvnias each. There are 175 more applications in review. Our whole team is from this oblast, we live and work here, so we reliably verify whether these people are real and what their needs are. From the first day of the war, we have been helping those who we knew in person with what we could. When we received a grant from the Ukrainian Women’s Fund, we distributed a Google form to register requests for help through the housing cooperatives chats. Every fifth application was rejected after verification. Those who do receive help spend it in accordance with their needs. Mostly they need medicine, food, clothes, and hygiene products. Those who have survived the occupation lost everything. Those who have been evacuated only took their children, pets, and documents with them. Mothers, wounded women, and people with disabilities are the main beneficiaries.

The following are just some of the requests that have been verified and satisfied:

Ozera village, Svitlana, aged 45 years: “Over 16 days of occupation, I lost my home and cannot work, and I need to feed my two minor children and old mother.”

Olena, 42: “I am bringing up two children, aged 6 and 9. The older one has cerebral palsy. We need help to buy therapeutic orthopaedic shoes for the season, she is still wearing winter shoes.”

Yanina, 60: “The money will be used to treat my eye, which was damaged when the occupants arrived.”

Olga, 38: On the night of 25 February, a rocket hit our flat. My mother-in-law died and now we are living in the basement, our clothes are burnt, our documents are partially burnt. I beg you for help.”

Evgeniya, 33: “I have four minor children (one of whom is disabled) and we lost everything we had—a flat, a car, and our livelihood. We barely survived the shelling!”

Olga, 40: “We barely got away with our mother from the village without taking anything. The younger boy has autism. We spent the money on food and anticonvulsant medication for the child.”

Seventy percent of Chernihiv has been destroyed. Under siege, it has no electricity and its suburbs are mined. A women’s organisation that received a grant from UWF collects and delivers humanitarian supplies, including to the occupied settlements. A large consignment of essentials is on its way to people who have taken refuge in the Kulikowska community 40 km from Chernihiv. The coordinator of the UWF-supported project describes the situation:

Before the war there had been 8,000 people living there; now there are 21,000. The locals have settled the newcomers in their homes. But they are not coping. People need everything, beginning with food and ending with the bed linen. We are in touch with a local NGO. It co-operates with the village council, collects information on the needs, and will fairly distribute what we provide.

One day, workers and volunteers of the organisation were transporting goods and people from the war zone when five rescue vehicles came under fire, with a mother and her two children in one of them. The coordinator tells their harrowing tale:

The car that rescued them had its tires blown out. The driver drove as fast as possible, until they were able to transfer to another car. On their escape they saw people’s ears being cut off, their hair being pulled out, women and children being shot from armoured vehicles, and others being raped. But at least they escaped. Another family that negotiated with the occupants to let them leave were not so lucky—they were directed to a minefield and the family was blown up.

Bringing supplies and services to people under siege is equally perilous:

Even drinking water has to be carried under fire. How much of it can one carry? Locals boil rainwater and river water from the Desna. In Chernihiv, many babies have been born prematurely. Hospitals have no electricity. They dug pit latrines in the yards and covered the walls with polyethylene — that is how hygiene works. Medicines are difficult to buy on grants and pharmacies now want cash. We found a way, but the hospital could not even send a photo of the license. We found another, “quieter” hospital that had power banks. We made an order there and divided the medicine between the two hospitals.

The town of Nizhyn in Chernihiv oblast survived and was not occupied. However, for a long time, it was on the verge of survival: the road to the city was constantly bombarded and delivery services did not operate, so food was only being brought in by entrepreneurs and volunteers. A total of 554 female students, lecturers, and employees of Nizhyn State University were under siege. Yulia Kuzmenko, a university teacher and coordinator of the humanitarian disaster rapid response project of the women’s organisation MISTO N explains:

There were many girls and women among them who got sick, as well as the elderly and people with disabilities. Even when something is brought to a certain shop, you still have to walk to it and wait to be let in. I joined the line at 08:30 and finally got to the shop door at 15:30 only to come out empty-handed because everything had already been sold out. A weakened person cannot bear it.

Thanks to the grant from the Ukrainian Women’s Fund, MISTO N was able to buy more than 500 food kits (cereals, stewed meat, sausage, and chocolate) in western Ukraine and deliver and distribute them to those who study at, teach in, and run the university. Yulia Kuzmenko is defiantly optimistic about the future:

I am not afraid to give my name and organisation because I believe in the Victory and that our public organisation will return to its purpose after the war: to ensure and promote the role of women in the development of science, culture, and tourism in Nizhyn. MISTO N was founded thanks to the Ukrainian Women’s Fund. Active women of the city—participants of UWF’s Women’s Leadership Academy have come together and implemented the project “Interactive Skansen” which was supported by UWF. Last year, we started planning the development of Interactive Skansen” as a space for healthy recreation and art therapy. Clay therapy has become popular here last year. After the war, almost everyone will need quality rehabilitation for mental trauma. The women and girls we now support are ready to work on this. I appreciate UWF’s quick response, flexibility, and foresight in supporting the women’s/feminist movement.

Whoever owns the information, owns the situation: Sumka for Sumy oblast 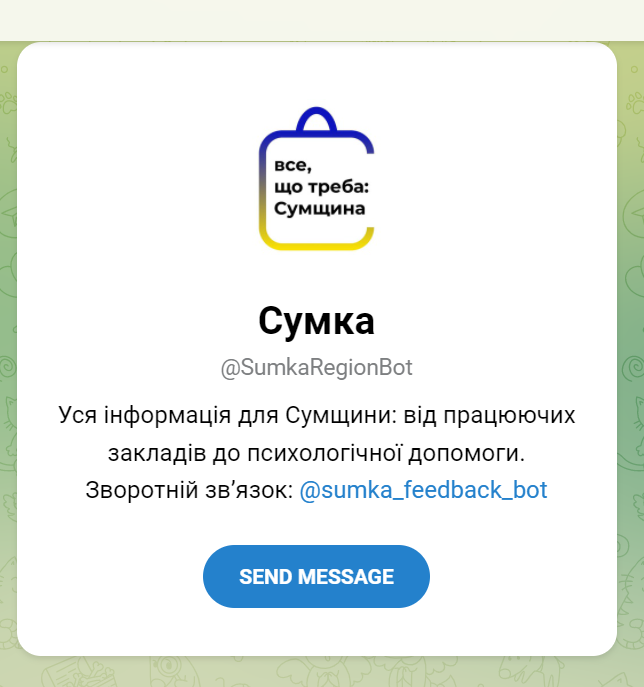 What to do in an emergency situation? Where to buy food, medicine, and fuel? Where to go for medical and psychological help? How to support the army and people in need? Which volunteers can be trusted? Since the first days of the war in Sumy oblast, many groups and channels have appeared on social networks to answer these questions. At the same time, it is difficult to find necessary and verified information quickly, and volunteer groups do not always know about each other and stay connected. Settlements and villages are often isolated: no one knows about their situation and they have nowhere to turn to.

Thanks to a grant from UWF, a women’s organisation in Sumy oblast created a chat-bot called Sumka on the Telegram platform to provide information in accordance with basic wartime requests. As the author of the project explains, “Psychological assistance, evacuation, volunteering—these buttons are identical throughout the oblast. What works in the city is distinct information for each locality. Our volunteers in ten cities personally check and update the data daily and confirm it with the local authorities.”

Residents of Sumy oblast learn about the chat-bot through the official information channels of their municipalities, through Facebook and Instagram via targeted advertisement, and through volunteer and thematic chats (such as for mothers, medicine search, and so on). Volunteers show older people standing in the long lines at shops how to use the chat-bot. This new information resource not only gives people what they are directly looking for (mainly means for survival), but also prompts them to think about things they may not have thought of themselves.  For example, says the project author, “Information about food and hygiene is coupled with a psychological support button available to everyone. There is information on where to turn to and ready-made solutions, such as audio stories for children”.